So, how was Space dogs Born?

One day on my news feed popped up the yellow ribbon campaign that had started in Australia, I knew nothing about it, so looked into it

. I was shocked to realise it is worldwide and having 2 rescues, one a nervous boy, it gripped me, for the next couple of weeks all I could think was, if this was promoted to the public it could help my boy, who just wanted to be left to play with us and his ball when out because things, dogs, people etc rushing at him scared him and he wanted to run and hide, and it could also help lots of other dogs and owners.

Then I decided I couldn’t spend my life thinking…. What if? And what was the worst that could happen? I could fall flat on my face, but hey at least I’d tried, so I enlisted the help of a few of friends and we were off.

I wanted to also help dog rescues as well, both my dogs come from such places and I am forever in their debt for bringing my two to me ♥ so the charity was formed, in our first 6 months Space Dogs Charity helped 3 rescues with donations and the charity will be donating to more rescues in the future

Why did I start Space Dogs campaign and how will it make a difference? 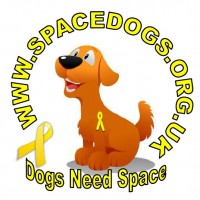 I believe that dogs should have a right to personal space, just because they are sweet and have waggy tails shouldn’t mean people can just approach your dog without asking.

Having a dog who was particularly nervous despite not appearing to be, I know only too well how looks can be deceptive! This is a subject close to my heart. I put over 3 years of training into Fergus and it payed off in dividends, because one little incident could set him back a long way in the confidence stakes during training, so a visible sign  helped both me and Fergus while training, as it got us both the space we needed to be able to work on things WITHOUT having our space invaded.

After the idea from Australia it gripped me. As an dog trainer I canvassed support from people in the dog world and I was thrilled how widely it was accepted that this was an excellent idea. After speaking to a few close friends I decided to go ahead and see if I could make a go of it with their help and support. I funded the first batch of ribbons myself, such was my belief in this campaign. A friend agreed to make them up for me so 100% of this money went to good causes. Another friend  agreed to build me a website and continues to date to give website support and design help,  and finally many  agreed to help spread the word across the country.

This campaign is not just aimed at rescue dogs, but for any dog that would appreciate some SPACE.

Training is paramount if you have a nervous/shy dog, and should be used in conjunction with a Space VEST and a yellow ribbon can be worn on the lead as as well, we need to help our Space Dogs find a 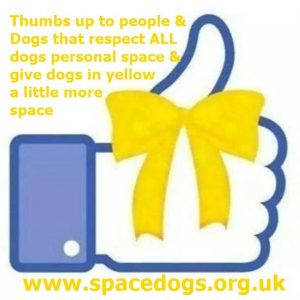 way to cope with the things they are nervous of, positive training is the only way for them, they have enough to cope with without being trained through fear, we need to build their confidence, Space Dogs will only ever be associated with positive based trainers, this is why we have a trainers scheme attached to the campaign, so you know they have been checked for you and you will be getting a Reward based/positive trainer.

There are many uses for the Space Vest/yellow ribbon.

It may be that people are undertaking training with their dog and would prefer not to be approached so they and their dogs can focus and concentrate – after all, people are well meaning and love animals and it is a natural instinct to want to say “hi” to a dog.

It may be that the owner is fearful of dogs (yes really!) and has got a dog to try to overcome their fear, they may be doing well with their dog but are still fearful of unknown dogs.

It can be used when you visit the vets, a stressful time for some dogs, which would be made much easier for them if others didn’t sit too close while waiting.

I myself suffer from a chronic pain condition and some days I have just about enough energy to walk my dogs and really don’t feel like stopping to talk to other well meaning dog owners.

A Space Vest can be worn permanently or only at certain times, trips to the vet, when in training classes, walking in busy areas etc, the choice will be yours.

Keep sharing the yellow leaflet/poster on Facebook, websites and 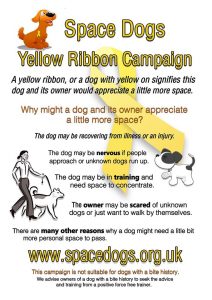 Twitter and get as many leaflets/posters displayed in as many places as possible. Remember we need both the dog owning and non dog owning world to know, so don’t just target vets, pet shops etc but newsagents, shops, public places in general.

Together we can make this work and make a difference

I will also use Space Dogs to educate people about dogs: how they should approach a dog; what to do if a dog approaches you – this is especially useful for children; sports you can do with your dogs where the Space Dog Campaign ribbon could also be useful when participating; give hints and tips of how to build the confidence of a nervous dog along with an insight into why dogs react the way they do sometimes. Education and understanding are key. 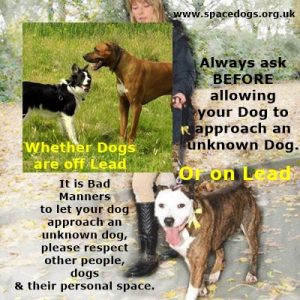